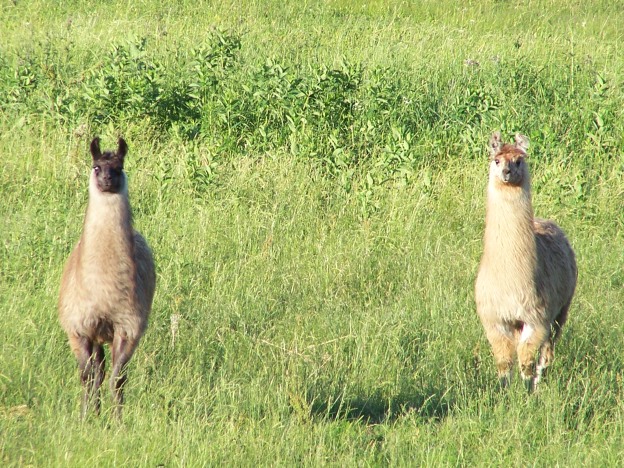 The neighbors across the road have llamas. I never knew how much I loved llamas until my family moved here. Our little slice of heaven has a llama field directly across from our house. The llamas often greet me at the mailbox, their ears turned in like fuzzy question marks.On occasion some of the llamas break free from the confines of the fenced in area. Have you ever seen a llama jump a fence? It is not unlike a deer, as far as that goes. Of course, they are taller than a deer, but are about as silly, as neither knows to get out of the road. Standing in the middle of the road is not safe…..if you are a deer, a llama, or a human being for that matter. Move it, my furry friends! Sometimes the llamas will decide the grass really is greener on the other side, and trounce their way to our front yard for a snack. I do not fancy myself  the “lord of the lawn” or “the grass master” (that is my daughter, actually) …..so I don’t really care if they snack on our yard, eh….as long as they are helping to keep the grass down. Besides, it gives the dogs some fun and excitement. Oh, there is also a brand new cria (baby llama). Picture a black and white cotton ball on stick legs. My husband and I got some pictures the other day. His were better than mine. It never fails. Every time I go to take a picture, the subject moves! Then it sort of resembles a blur. Just use your imagination.

This morning I was sitting at the kitchen counter, scanning through Facebook posts, as I am wont to do, when all of a sudden I heard them. My ears are attuned to all things llama. The boys were fighting! I grabbed my phone and ran out to the front porch. I turned the video on my phone. Of course, my phone does not zoom in well and it was too far out to really do a good job of videoing. Although the picture is not zoomed in, one can really hear the llamas (they are extremely noisy when going at each other!). Young male llamas like to neck wrestle each other. Usually it has to do with dominance and territory. One of the llamas neck wrestled the other to the ground but, wait…….he popped back up, bellowing at the top of his lungs. Just like two teenage boys fighting. During the entire video I am giving “Wild Kingdom” commentary. Great stuff, people. I might have missed my calling in life. Of course, at the end of the video, one can hear my dogs standing beside me panting (I promise it is them, not me), and then I can’t get the video off and so you get to see my feet and part of my front porch before I mercifully end the show. I never claimed to be a videographer, people. (I was going to attempt to download the video because it is only two minutes long. Alas, living out in the sticks, there is no fast download of video. I might post it tomorrow, because it will probably take that long to load!)

I love living in the country! City living might be more convenient, but one can’t see llamas in the city….and that is really sad for you. I, on the other hand, can watch all the llama drama right from my front porch.  #greenacresistheplaceforme #llamalove #llamadrama